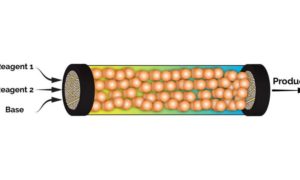 About 70 percent of pharmaceuticals are manufactured using palladium-driven catalytic processes that are either fast or efficient – but not both. Researchers at North Carolina State University have now developed a green chemistry method that combines aspects of both processes to improve efficiency at a minimal cost of processing time.

Specifically, these palladium-driven catalytic reactions are used to connect carbons in small, organic molecules to create larger molecules for use in pharmaceuticals and other applications. Traditionally, there have been two ways to do this.

In homogeneous processes, palladium is dissolved in solution, allowing maximum exposure to the organic molecules, or reagents. This makes the process very fast, but results in a lot of palladium either being wasted (because it gets thrown out after target molecules are harvested) or being recovered at high cost (because the recovery process is expensive).

In heterogeneous processes, palladium is fixed to a hard substrate in a pack-bed reactor, and the reagents are run through the reactor. This takes much longer, but little or no palladium is wasted.

This site is registered on wpml.org as a development site.